The Great War dragged most of the world's population into a conflict between the powers. The rapidly growing military industry was devouring almost all resources. State borders became battlefields. The financial crisis and high mortality rates reached a critical point. The world plunged into devastation, misery and poverty...

You have to lead a crew of an armored War Rig of your private transport company. On the road to fame and fortune, you will choose a side in an endless war and explore the most remote and dark places of this world, improving your skills, weapons and covering your name with glory.

At the beginning of your journey, you've been granted War Rig and it's commander. Each commander has a number of stats (attributes) and two perks. Stats affect the properties of the train and can be improved during an exploration or battle. Perks have unique properties and rarity. They are determined when the new commander is born. Two commanders can be exchanged in a military unit for a commander with an increased rarity of perks. Supply of commanders is limited.

Having several commanders with a different set of perks is very important. This gives variability in different game situations.

Your War Rig initially consists of wagons. There are several types of wagons. Each wagon can be modified with modules such as armor plates, guns, engine, chassis and so on. Modules are have attributes and affect the War Rig in different ways.

The War Rig configuration and modules must be carefully selected before starting your in-game actions.

The War Rig and wagons are ruled by your crew. When adding new wagons or changing the configuration of it's modules, it is necessary to change the composition of the crew — to hire new members, remove and add existing ones.

You can also hire auxiliary combat units that affects the outcome of your actions and required for specific actions.

Gameplay based on a simple three words - Explore. Conquer. Earn.

The world populated of several states at war, which adjoin borders and consist of provinces. States and provinces are connected by railways. Outside the borders of the state there is a wasteland - the remnant of an area which is abandoned and destroyed long ago by the great war. No one remembers what secrets it keeps. Provinces may be captured, capitals not. Each time when province is captured by state the border is changes. 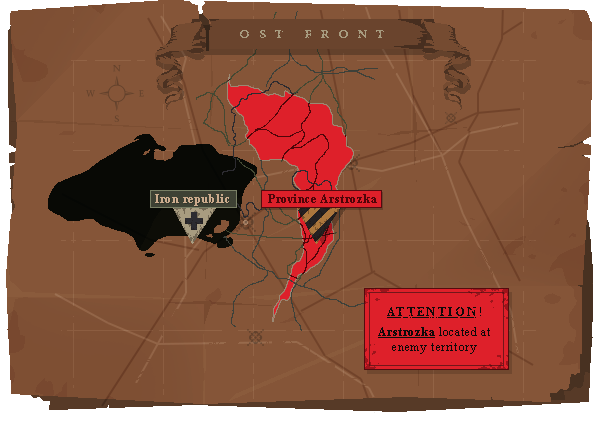 The player can choose their state and move their War Rig between adjacent provinces while using railroads. Each province has a unique ability. Some provinces specialized in commander training, some on crew improvement, some on spying services and intelligence, mining and etc.

To travel through the world player needs to start the expedition. There is two types of expeditions - exploring and conquering.

War is declared in the province when players of the adjacent state are sending their War Rigs with conquering expedition. Other players of this state can join the war. The outcome of the war is decided with arms pressure, which depends on many factors. Attackers and defenders receive rewards proportional to their contribution.

War can only be declared when the needed level of influence is reached in the province. This can be done with special scout units.

Players in the state that owns the province can mine the world's only and most valuable resource - iron.

Iron is crucial and used everywhere - hiring a commander, training a crew, buying new modules and wagons. A certain amount of mined iron is needed in the province to claim it. If this amount is not reached and the province is conquered by another state then all mined iron is going to the winner. So be aware of enemies lurking around your provinces!

While not in war players can explore the wasteland. It also consists of provinces with unique abilities, but cannot be mined for iron. During the exploration mission, you get experience, find modules, hire the crew, and can find a little bit of iron. 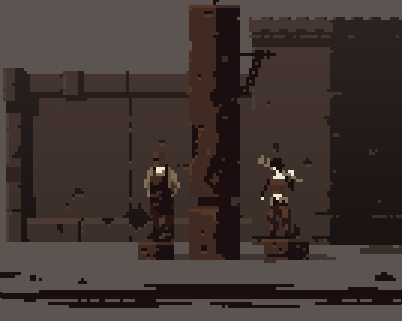 The process of exploring, conquest, and earning is endless, but not limited. The game is designed upgradable and will evolve by community chosen path.

$IRON is ERC-20 token. Each other asset in the game is presented by ERC-721 NFT with unique upgradeable attributes. Changing and upgrading your assets affects their appearance. All transactions within the game are made using $IRON with a constant high volume provided.

Considering $IRON being the main payable currency transaction fees are low and only include a 4% liquidity/marketing fee. The mechanism of earning $IRON is included in the game so no redistribution either. To avoid including mint function in $IRON, and provide limit supply with slow increment in mining difficulty, burn is included on all mining actions in the game. Each $IRON spent in-game is added to a global mining pool and each transaction made in-game is excluded from fee.

The game is fully decentralized. All game assets stored 100% On-chain. Your in-game earnings and all the art stored in the blockchain.

We don't want to give empty promises and make roadmaps that no one reads anyway. We have a very simple-to-understand release schedule that we will stick to, keeping in mind that quality comes first.

WAR Bonds sale. $IRON launch. 50% of $IRON will be distributed trough presale, 50% of it will be reserved for in-game mining.

Game is deployed on-chain and assets are available for mint and purchase. Start of global exploration and War. Road of Iron is evolving by community chosen path.

Road of Iron will be launched on two mainnets - Binance Smart Chain and Polygon(MATIC), Layer 2 network of the Ethereum.

This decision has several advantages. Firstly, the project will receive more attention from the audience of both networks and will be able to launch on Ethereum later via L2 rollup. Secondly, users of the Polygon will be able to natively use OpenSea for viewing and trading game assets. Binance Smart Chain users will get their own game-asset marketplace.

The sale will be carried out on the same terms in price and volume for both networks, and the $IRON will be bridged through Router across two networks via AnySwap. Commission of transfer from one network to another will be less than 1 USD. All combined, this will allow the post-launch price to remain the same in both BSC and MATIC, and synchronize with each transaction, while the audience coverage will increase.

Game assets will be not transferrable multichain at the beginning, only $IRON. You can think about it as playing MMORPG on two different servers. You can transfer all your gold, but not the character. Game assets swap will be added later.

Presale of $IRON will be held via Pinksale launchpad through a whitelist. Liquidity will be locked forever and the team has no tokens. The date of the presale is to be determined. Join our socials and stay tuned for updates.

Each participant of the presale will be granted early-supporter bundles.